I saw pictures this week of the 2015 New Zealand Home of the Year, and went right back to the 70’s. There were the split levels, raked ceilings, and exposed timber, and to complete the vibe, there were the indoor plants. Macrame plant holders holding Tahitian Bridal Veils. Vines creeping through the house. I loved it. There was not a single white phalaenopsis orchid to be seen – what a relief! For at least a decade there seems to have been a law saying that expensive white orchids were the only plant allowed inside the house of anyone with a modicum of good taste.

I’m glad to see indoor plants returning, as I got started on my ‘indoor garden’ some years ago and have found it very rewarding. It started with a small potted palm from the supermarket, bought to put in front of an unused fireplace. I added a couple of ferns, a streptocarpus and some begonias. Then I needed an African violet because I’ve always loved their sparkly flowers. My daughters brought home tiny cacti from school fairs. I went to an orchid show and brought home 3 large cymbidium orchids…and so it went on.

I just repotted the hare’s foot fern, and gleefully showed the family the ‘hare’s feet’ which now look more like alarming hairy legs. Another eccentric member of the collection is the stone plant, which after 3 years has managed to double in size, to 4.5cm across.

Last year I came across a lovely book called ‘The Unexpected Houseplant’ by Tovah Martin. (Timber Press, 2012). I highly recommend it – its full of fresh and inspiring ideas. Following one of her suggestions, last year I planted Iceland poppy seedlings into individual pots, and when they reached flowering stage I brought them inside, along with some primulas, and they lived happily on the coffee table for several months. Gorgeous. Tovah is American, so all the seasons and directions are back to front and upside down for us down-under. You just have to remember that when she says a plant should be near a south-facing window, she means the warm side of the house, not the Antarctica-facing south windows we have here.

As winter approaches and we retreat indoors, I’ve started planning the next round of indoor garden projects. The poppies have been potted and are living outside for now. Hyacinth ‘Delfts Blue’ bulbs are sitting in their special bowl in the cupboard under the stairs. They’ll come out when they start sending up shoots. Last year they got off to a flying start, then the flowers failed miserably, possibly due to being too warm, so this year I’m trying again and will probably just turn off the heating and tell the family to put on extra jumpers….seems fair.

I have filled a trifle bowl with gravel, water, Daffodil ‘February Gold’ and Crocus ‘Purity’, and will hopefully get a bowl full of flowers in a couple of months. The process may be known as ‘forcing’ bulbs, but I’m happy to just ask politely and hope they respond.

If the trifle bowl experiment doesn’t work, I have a simple fallback plan. Bunches of daffodils from the local dairy.

3 thoughts on “Bringing the Garden Inside” 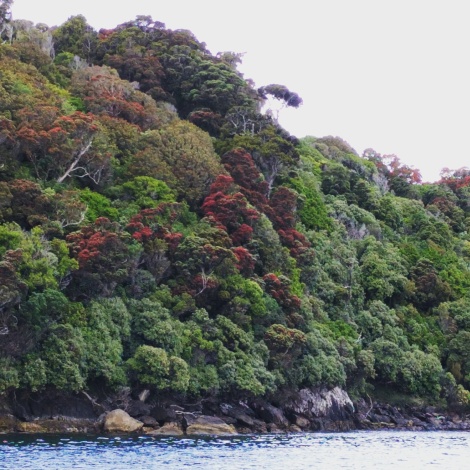 Mid-summer flowers in my garden 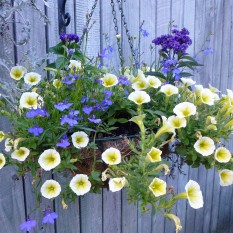 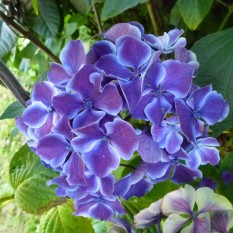 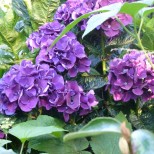 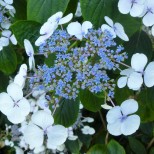 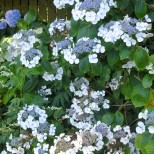 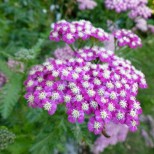 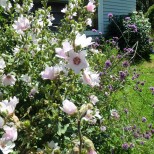 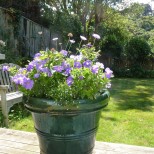 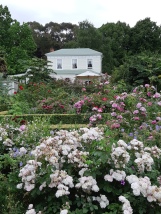 Rising out of a sea of roses 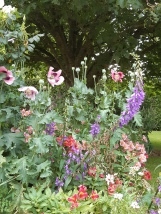 I hold an Associate Diploma Applied Science (Landscape) with Distinction from Ryde TAFE in Sydney. Prior to my landscape training I completed a BA and Music degree at Auckland University.
Follow Sarah Norling Landscapes on WordPress.com
Loading Comments...
Comment
×
%d bloggers like this: